Borussia Monchengladbach are back on the rise going from a league average Bundesliga side just a few years ago to comfortably qualifying for the Champions League and pushing for 2nd this season. They have rebounded from losing Reus, Dante, Neustadter and others after their great 2011-2012 season and climbed back toward the top of the league. There is something strange about Gladbach though, and you see it when you compare their shot numbers to Wolfsburg, who have a had a similar run. 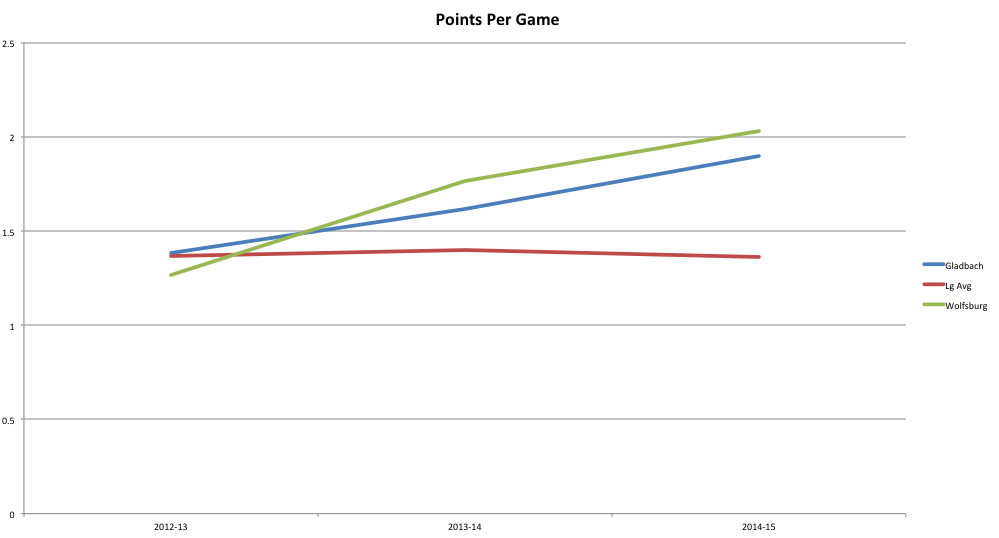 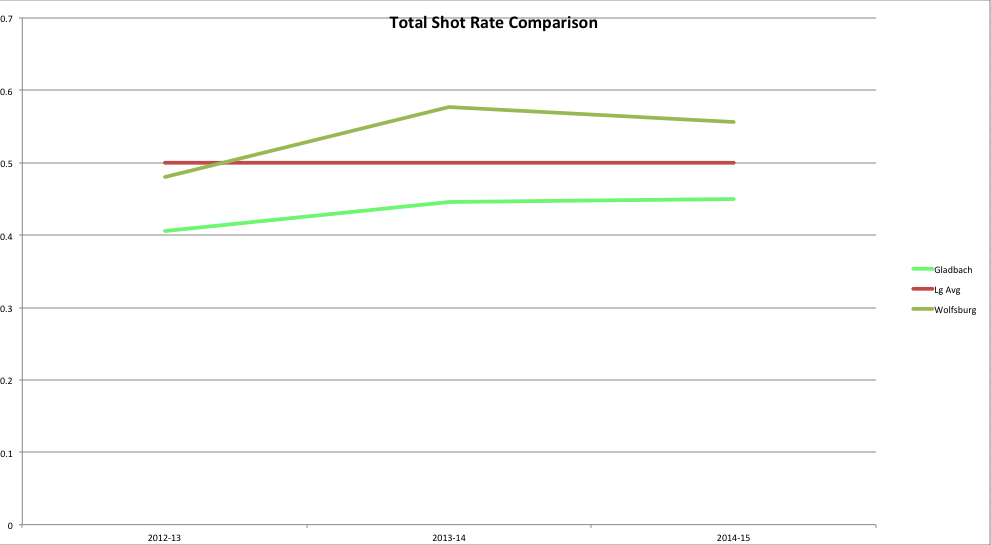 The Foals haven’t neared 50% TSR (total shot rate, team shots/total shots in game) meaning they are repeatedly being outshot by their opponents. This is not how a Champions League team plays, in fact no team in a top 5 league currently in a UCL spot has a TSR of 50% much less Gladbach’s 45%.

So how can we explain Gladbach’s great season, which has them in 3rd place with the 3rd best goal difference?

It doesn’t have much to do with distance, they don’t take closer shots than the average Bundesliga team: 11th in close shot %, 12th in average distance. Defensively they do allow a tough shot:

Even with distance accounted for, we can’t explain Gladbach’s numbers. Take a look at this chart of last 3 years in the Bundesliga, it shows teams who have outperformed their expected goal* total on the offensive side:

*Expected goals is a model that factors in shot location, body part and game state to give a number showing how many goals that shot is typically worth.

This year, the Foals are in the middle of the pack but the previous two seasons they put up the 2 largest over-performances of the 54 seasons I have data for.

On defense, it’s a similar story:

Gladbach have the 2 largest under-performances of expected goals in the past 3 seasons. They have come this season and last season, with the 2012 year above middle of the pack.

How do they do this? Expected goals might be missing something, Gladbach could be the luckiest team in Europe or a combination of the two. Let’s look at the luck factor first.

Over the past 3 seasons Gladbach has a expG%/actual goal% ratio of 1.20. Here is the list of individual seasons across the top 5 leagues that reach that level of outperformance:

None in France or Italy

So Gladbach’s 3-year average “outperformance” was equaled only 3 times in the other 331 single seasons I have in my database. When other teams are reaching your 3-year level approximately 1% of the time over a single year, I feel confident saying there must be more going on than just blind luck.

What factors are there that could lead Gladbach to perform so much better than their shot location data suggests? 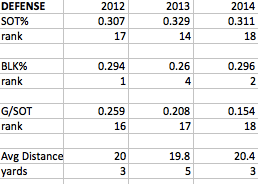 We see here that Gladbach are great at most per-shot defensive metrics. The distance is accounted for directly in the expected goals model and the others are regressed but still accounted for in part. Blocking shots, keeping balls off target and a low G/SOT have varying R squared values around between .3-.5 and go into the model but as we saw, Gladbach blow past the model each season. Do the Foals and Lucien Favre (manager since 2011) have a strategy or tactic that gives them more control over opponents rates than I expect and less left up to luck? Let’s take a look at the passing stats to see if they are doing something special there.

The first thing you notice as you peruse the pass numbers is Gladbach do not bother the opponents very much. They have allowed the 3rd, 1st, and 4th most completions per game and top 3 completion % against in each of the last 3 years.

At first glance, this ease of passing is distributed over the entire field. They have been the easiest team for opponents to pass against in all three thirds of the field (own, middle, attacking) in each of the past two seasons. The only exception is Koln has been easier to pass against in the midfield this season. This seems to imply Gladbach are putting zero pressure on the ball and simply sitting back.

These numbers don’t really show them ever pressuring the opposition, even as they move into the final third. We need to look deeper to find Gladbach’s defenders.

Within the final third, we see it gets harder and harder to complete a pass as you move toward Gladbach’s goal. This following graph is using a z-score, so a 0 is comparable to league average in each area. You can see that the Foals go from nearly 2 standard deviations easier to pass against to about .7 standard deviations on the tough side as opponents close in on goal. We finally find the Gladbach defense: they are packed in close protecting their goal.

This packed-in defense also stops intrabox passes (passes that start in the box and end in the box):

No team is harder to complete that extra pass inside the box against than Gladbach. Michael Caley in his ESPN piece wrote about how “extra-pass” shots can be scored at a higher rate: http://www.espnfc.com/blog/tactics-and-analysis/67/post/2427824/barcelona-arsenal-attacks-excel-due-to-danger-zone-passing. This makes sense as someone playing a shot immediately after a pass is generally going to have more space as the defense wasn’t closely marking him or paying full attention to him just seconds earlier giving him more of a window to get a shot off. Thus intra-box pass completion rate, block rate and pass completion rate close to the goal is likely the closest proxy we have to defensive pressure on shooters which is the biggest weakness of most current (mine included) expected goal models. Gladbach rate near the top of the league in all three of those categories, which means that all those shots they allow are harder than we’d expect on first glance.

Example pulled from one game (not claiming this is representative at all, it’s just one example)

Dortmund win the ball back from a Gladbach attack and look to have some space on the counter with 2 on 3 at the worst and maybe a 2-on-2 with pace: 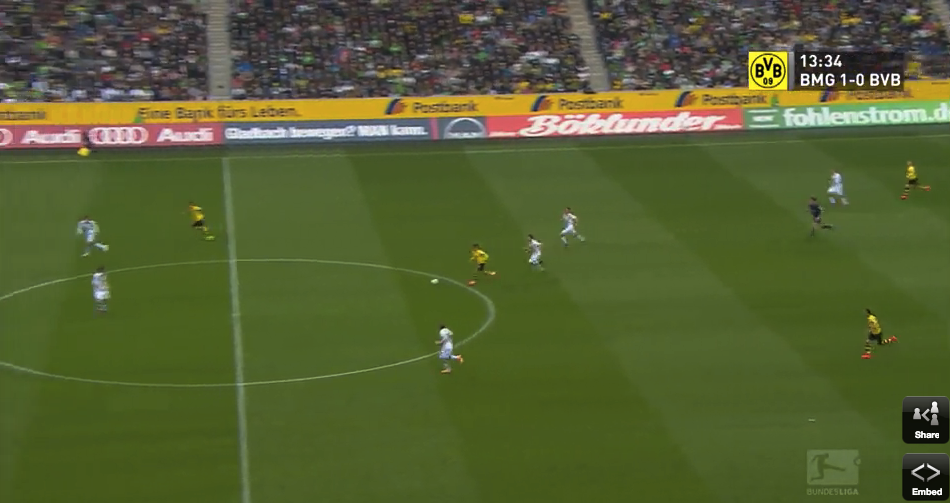 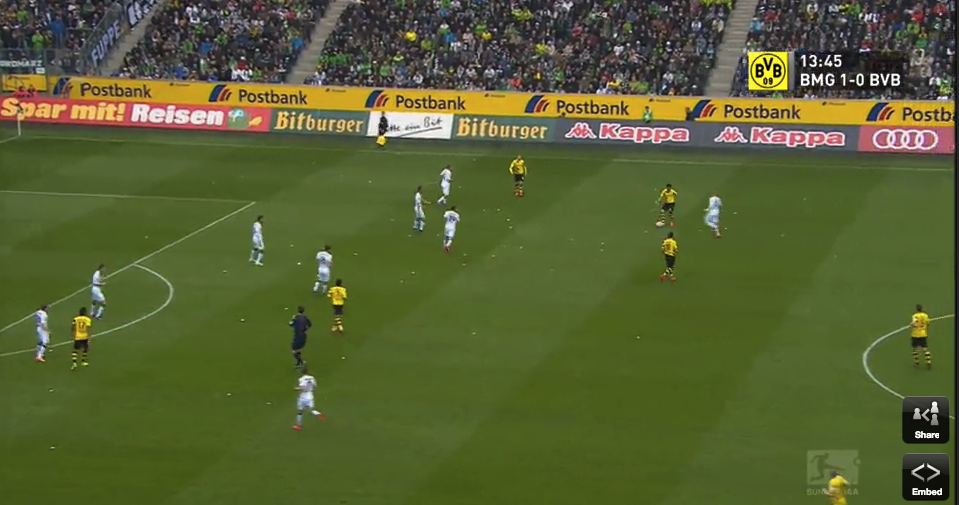 a few seconds later, they set up their typical defense: 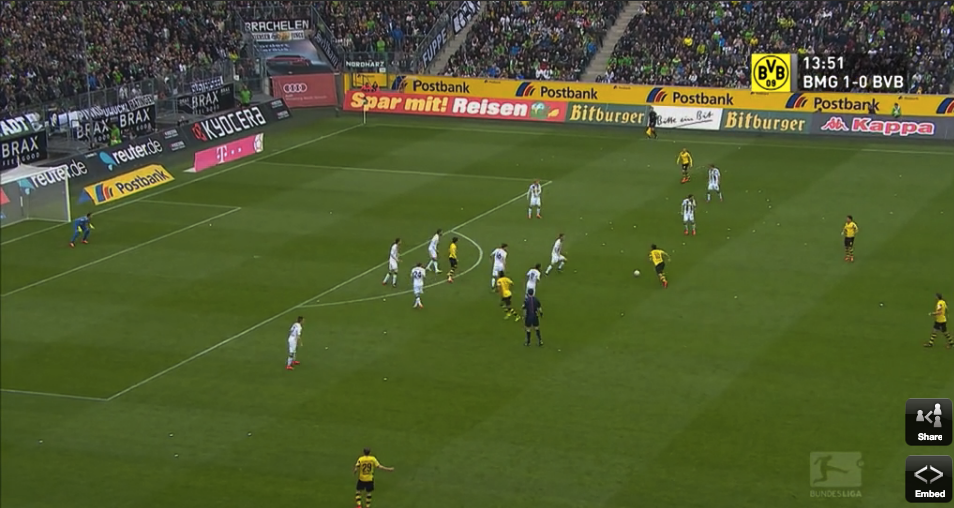 You can see all 10 men behind the ball in their own third. Dortmund wind up completing a lot of passes but none of any danger as they pass the ball around out of the reach of the Gladbach block before trying a speculative ball over the top. Lucien Favre has gotten his entire team to buy into getting back and defending in deep areas (6 different players are in the top 32 in blocking shots) in what seems to be a very effective system.

Offensively Gladbach are a very deliberate team. In the 2013-14 season they had the lowest attack/own third ratio of any team in the Bundesliga. They spend more time passing the ball in their own third than any other team. That’s not where you usually see good teams:

This slow, deliberate pace allows them to complete a huge % of their passes and complete more passes per game than everyone shy of Bayern the past two seasons.

In total these past 3 years their offense has outscored significantly what we’d expect from their shot numbers alone. Let’s take a look at their metrics: 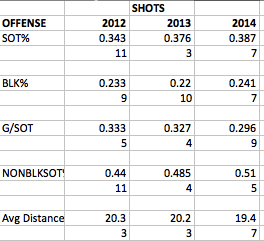 They take shots from way out yet routinely rack up good goal/SOT and SOT% numbers. Let’s see how they do this.

Probably not. It makes intuitive sense that a team that sits so deep might break at pace on the counter and create some clean looks at goal but the numbers don’t really bear this out. WhoScored.com credits Gladbach with six counter goals this season (in a 5 way tie for 4th), but only two last year (t-14th) and three in 2012-13 (t-15th). They don’t score a lot of goals from the counter.

Let’s look at the pass #’s again to see if they are doing something different passing wise, like they were on defense:

Here we see that as they move closer to goal in the attacking third, their pass completion z-score increases. Inside 25 yards they are 2 standard deviations above normal. Gladbach also have the best % in the league when it comes to intrabox passes.

Gladbach don’t get the ball into box at massive rates but when they do they generally play it in from the sides.

This helps keep the ball (sides much higher completion % than center) at the expense of creating dangerous chances (over 3x more likely to create a chance from the center of the pitch). However, they don’t rush the ball into the box with crosses when they are wide. No team completes fewer crosses per game (per WhoScored) and no team plays a higher % of backwards passes from wide positions than Gladbach. This indicates a team that picks its spots and values the ball. Only Bayern has a higher completion % when playing a medium or long pass and no team has more assists on those type of passes than Gladbach. The Foals have 20 assists on passes of 15 yards or more, Wolfsburg have 17 in second place while the average Bundesliga team has 8.

What have we learned?

Gladbach games feature a ton of completions. The Foals do not pressure opponents into turnovers, allowing teams to move the ball up the pitch with ease until they get close to the goal. That’s where the Foals buckle down, apply pressure, and force opponents to a lower shooting and passing percentage than most teams. On offense, the team moves the ball at will completing an extremely high percentage of passes. Playing up the wings helps with this but there is no rush to swing crosses into the box. Gladbach complete a great percentage of passes on the attack, especially passes that travel 15-35 yards (which they use more than any other team in the league). No team is better at completing passes when inside the box, indicating Gladbach uses their deliberate pace of attack to move several players up the field. This leads us to believe that Gladbach are taking more one-timers or shots as the result of passes before the defense has re-adjusted. Their offensive numbers are the opposite of the defensive numbers as they improve their passing percentages close to goal and generate cleaner chances than the average team.

Expected goals models can certainly take this into consideration at some point, my summer improvement will hopefully have some sort of passing style factor but for now it’s enough to realize that Gladbach’s distinctive style does not come through in expected goals models. Their over-performance is not simply luck (though how much is luck/repeatable skill is certainly up for debate). This would have been nice to know the past two years when they repeatedly hurt my bankroll every weekend, going forward I will be much warier when going against the Foals and they are an important case study for anyone wanting the quantify the game.

View all posts by insdieman

26 thoughts on “Gladbach: luckiest team in Europe or a a blind spot in expected goals?”